You are invited to sign this appeal here: https://bit.ly/indigenas2020eng

CARACAS, Venezuela (AP) — Venezuelan officials who traveled to the Amazon to investigate a report of a mass killing in an indigenous community found no evidence of any killings, the government said over the weekend.

Venezuela’s minister for indigenous peoples, Nicia Maldonado, said Saturday that the team of officials traveled by helicopter to a remote jungle area where a Yanomami Indian group reported last week that it had received word of a massacre committed by gold miners in July.

“No evidence of any death was found,” Ms. Maldonado told state television. She said officials had not found a burned communal hut, which the indigenous group said had been reported by people who visited the community and talked with residents.

The Venezuelan government on Sunday released a statement saying its investigators had found no evidence to support the massacre claims, which it called “information generated by some media outlets and destabilizing sectors seeking to generate uncertainty in the population.”

Leaders of the Horonami Yanomami Organization, the community group that released the account last week, could not be reached for comment on Sunday.

Christina Haverkamp, an indigenous rights activist in Germany, said it was possible that the officials who traveled to the area simply did not find the correct community and should keep investigating. Based on the indigenous group’s account, she said, “I think there were killings.”

“If they want to find the truth, they will only find the truth together with the Yanomami,” Ms. Haverkamp said in a telephone interview on Sunday.

Ms. Haverkamp, who has worked among the Yanomami for two decades, said that finding out what happened would be complicated in part because the Yanomami generally avoid talking about the dead and typically say “a lot” to describe any number greater than three.

This year we Yanomami celebrate twenty years of the demarcation of our Indigenous Peoples Yanomami territory, and yet we are seriously concerned about the lack of effective action to protect us from the increasing presence of Brazilian miners that are working illegally in our territory in the states of Roraima and Amazonas, in Brazil, but also on the Venezuelan side. We do not only suffer from the growing invasion of gold miners, we also have to endure the presence of farmers within our Yanomami territory. The FUNAI has for two decades not removed the invading farmers in the eastern border of our territory in the region of Ajarani. The Yanomami land, where we live, is the home of one of the largest people of recent contact in South America. Since 1992 our territory was officially recognized and demarcated as Indigenous territory by the Brazilian government. The Brazilian Constitution and international instruments guarantee our right to our land and natural resources.

The existences of countless mines are causing negative environmental, social, economic and health impacts, endangering our lives and the forest (Urihi a). The miners are destroying our forests with their machines. The miners are trading weapons and ammunition with some Yanomami, encouraging conflict between our communities that result in deaths. We also have cases of serious diseases, like AIDS, that we fear the miners can spread in our communities.

Numerous documents have been submitted by our Yanomami Association Hutukara and our partner organizations requesting full and transparent investigation on the illegal mining activity. However, the Federal Police, so far, has not carried out intelligence work to identify and allow the condemnation of the mining business. Actions towards the withdrawal of miners have proven to be insufficient; even so they have been expensive. The complaints during the last four years led to some operations of the Federal Police and the Army, last year a few miners got removed and arrested, and some parts of the heavy mining machinery located within our territory where dismantled. Nevertheless, driven by the high gold value and the absence of additional measures necessary to thwart the illegal business, the presence of gold miners increased in our land.

Our concern is also with the survival of a group of Yanomami that live in voluntary isolation Moxihatetemapë) that have been recently encountered only ten kilometers away from a mining area, as it has been widely reported by national and international media.

The same gravity is the permanence of farmers in the region of Ajarani in the eastern boundary of our Indigenous land. The removal of these invaders has yet not happened, and that twenty years after the legal demarcation of our indigenous land. Away from that the Farmers deforest the areas that they continue to occupy, their presence is an incentive to new invasions, in a region heavily pressured by cattle farming.

The economic growth of our country stands in stark contrasts with the state’s ability to protect and promote indigenous rights. Besides dealing with a negative agenda, there is a lack of a territorial protection management program for the Indigenous Yanomami territory, that are supported by appropriate public political policies that promote the way of live of the Yanomami and protect our habitat.

Thus, in the year of commemoration of the demarcation of our legally recognized indigenous land that had been announced during the Eco 92 (UN Earth Summit), to be remembered in the Rio + 20, we urge the President Dilma to take immediate measures to remove the miners and prevent them from re-invading the Yanomami Territory, and to investigate and punish the funders and beneficiaries of these criminal activities that harm indigenous peoples and the Union and to establish, in consultation with the Yanomami, Ye kuana and their organizations, an ongoing program of inspection and monitoring of the land, and therefore promote our well-being and well-living.

Lake Caracaranã, Raposa Serra do Sol, March 12, 2012, during the 41st Assembly of the Indigenous Council of Roraima (CIR). 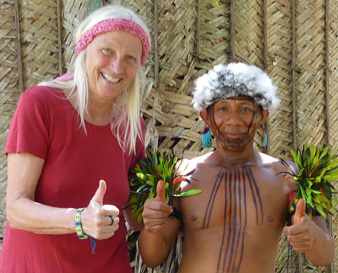